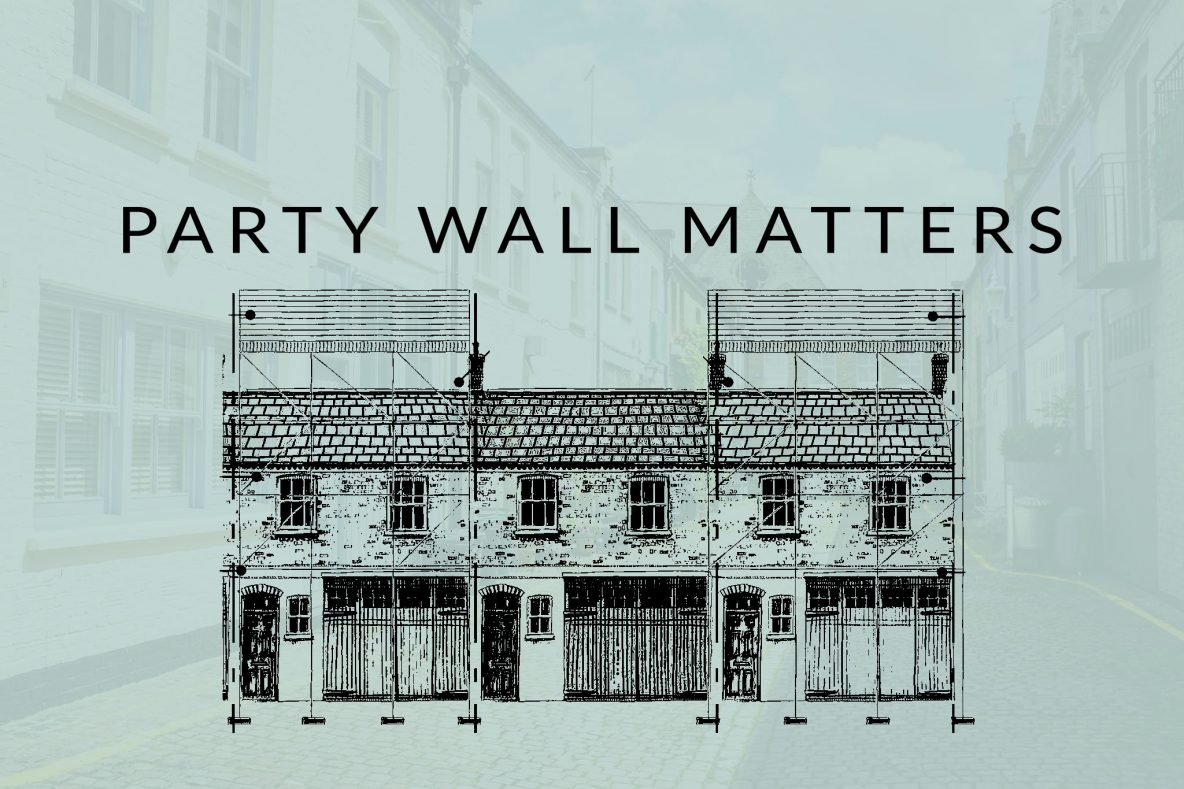 This is the eighth in a series of 10 posts on my blog about Party Wall matters specific to London Mews. This series of posts has been written as a general guide to both Mews Owners and to others involved in the development of these properties. The first Part Wall post provided an introduction to the likely impact of Party Wall legislation and explains the issues likely to affect a Mews property. The second post addresses Party Wall legislation and procedures in general. The third post deals with typical London Mews Party Wall works and the fourth and fifth posts concern other possible issues for Mews Owners and their neighbours.

This post addresses issues that can be contentious or simply go wrong.

Presently, as a result of the involvement of the Party Wall Surveyors in discussion of escrow monies etc. as well as other party wall matters one of the biggest issues can be the payment of the Surveyors fees. The only guidance the Act offers is a suggestion that these should be reasonable.  What is reasonable can easily form the basis of a dispute.

Typically, the Building Owner’s surveyor’s fee will not be contentious as they should charge a fixed fee.  If this is not the case by all means ask for a fixed fee quotation.  It is the Adjoining Owners fees that are more variable and more likely to be contentious as these will probably be time charged – based on their hourly rate. Additionally, if a project is more complex, the cost of any consulting engineer needed to interpret specialist technical information beyond the ken of the surveyors, such as geotechnical reports, temporary support designs, heave analysis, structural design details and any substantiating calculations, will need to be added.  As onerous (or expensive) as this sounds, when only one or two neighbours are represented the fees are generally modest in terms of the overall project expenditure.

Fee issues can arise when the Mews is surrounded by numerous other properties – see post  51 -and their representatives cost a disproportionate amount when having regard to the cost of works undertaken. The numerous appointed surveyors should manage their affairs and only present reasonable fees, but disagreements cannot always be avoided. To determine such issues the surveyors must first agree to the appointment of a Third Surveyor who will hopefully deal with referrals on a quantum merit basis rather on weight of evidence. Over enthusiastic surveyors can have a habit of producing a disproportionate amount of evidence. A common argument which arises is for a party to query why if several surveyors agreed matters for £X why should the other surveyor demand £XX. This may not always apply, but if things are equal and there are no other compelling reasons, billing should be reasonably consistent between surveyors; this should encourage other surveyors to avoid seeking disproportionate fees for services that are not entirely warranted or required.

The need for the correct approach to basement excavations

In the last 15 or 20 years there has been a considerable increase in subterranean development and much of this has been in relation to Mews properties which, due to their size, construction, location and tenure, can hugely benefit from the addition or a large room or rooms underneath them.

Constructing a basement under a Mews property creates a number of challenges in the short, medium and long terms, as there is the potential for the Mews to move and for damage to occur to it or to neighbouring Mews. It is important that the design and construction is carried out by suitably experienced professionals who will need to produce documentation to substantiate that these challenges have been addressed. 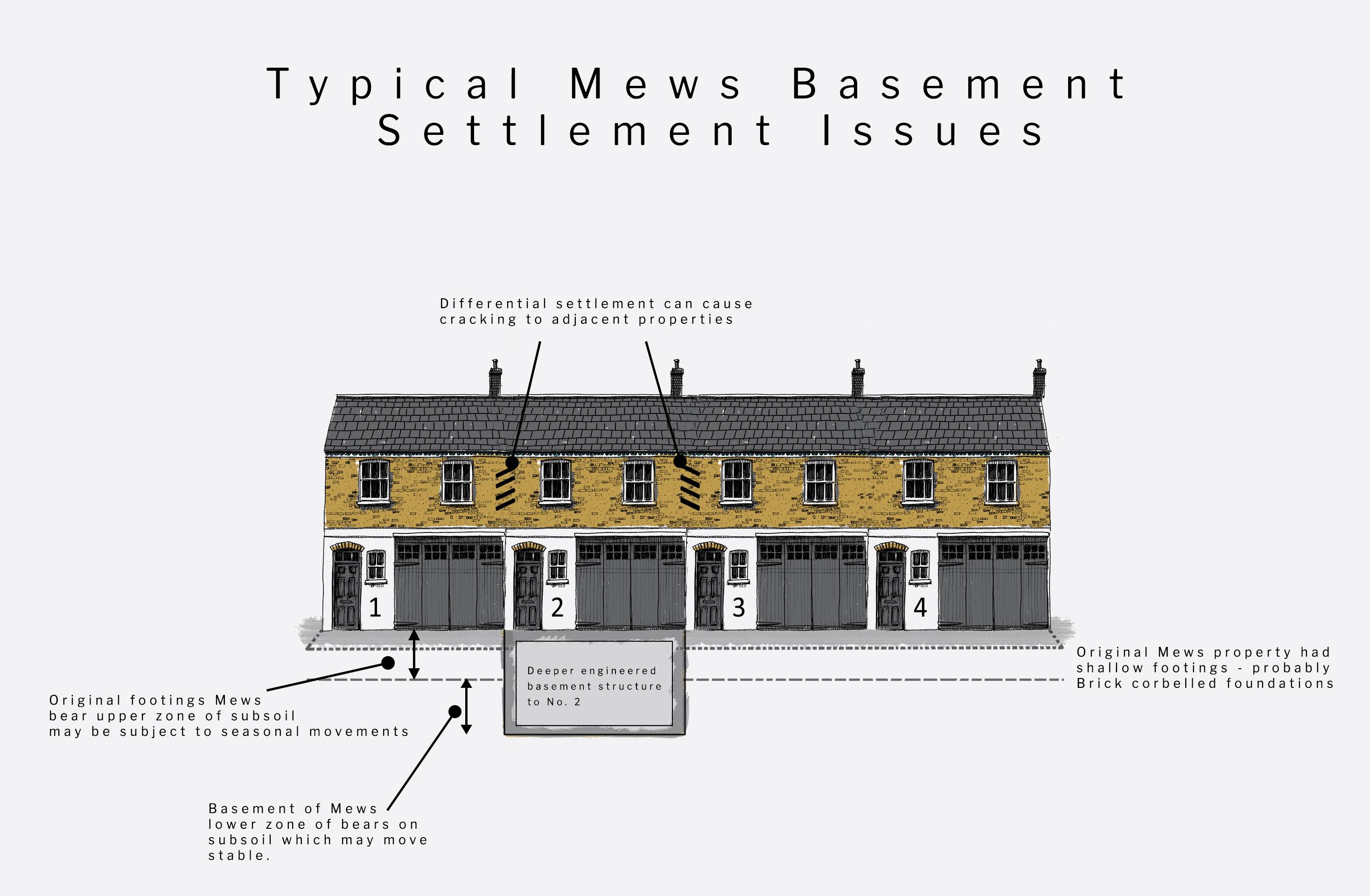 There are no hard and fast rules for each set of circumstances, but it is generally accepted that basement excavations pose the greatest risks not least because the medium term and long-term effects of basement excavations are not yet universally known or agreed upon. As will be explained again in Post 51 D, London clay has benefitted small and large subterranean projects down the years, but soil conditions vary across London and not all sites benefit from uniform London clay in which to dig.

Each London Mews property site has to be considered on its own merits; however as a general rule long term movement is more likely to occur in clay soil than in gravel or sandy soil.

Additionally, construction issues must be addressed.  Each contractor has their own method of working and each Mews structure needs to be considered unique, based on its original construction and the subsequent degree of alteration.

There has been a trend over the years for requests to be made for provision of more information as to the timescale and the manner of the works. In addition, compensation needs to be dealt with as well as the sometimes complex issues arising with insurance and also the arrangements for security monies. This merely reflects the risks posed by subterranean and above ground development works in London Mews.

Although the inherent risk of basement construction can be mitigated, it cannot be removed entirely.  We hope we have by now explained the Party Wall Surveyor’s role involvement in ensuring that the Act properly facilitates and safeguards both neighbour and developer of London Mews.